My son is eight now but has been obsessed with trains since he was an infant. Finding picture books for him was always a challenge because if there wasn’t a train or at least a truck or bulldozer in it, he wasn’t interested. I didn’t always want to read non-fiction books and I was tried of reading about Thomas the Tank Engine. Sound familiar? If so here are a few books that my son and I both recommend.

Choo Choo Written by Virgina Lee Burton
This was my son’s favorite book. Choo Choo was Virginia Lee Burton’s first book, originally published in 1935. She certainly must have understood little boys (and girls) because this story of a run away steam engine is still chugging nearly 75 years later. I also recommend Mike Mulligan and his Steam Shovel and Katy and the Big Snow also by Burton. They may not have trains but they have larger machines (which are almost as good.) 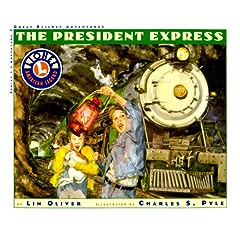 The Lionel Great Railway Adventure Series by Lin Oliver illustrated by Charles S. Pyle
Sadly these books are no longer in print but they are nice picture books for the train nut who is getting a little old for Thomas. These are fictional stories but each centers around a real famous train. The books in the series are, The Mighty Mogul, The Daylight Limited, The President Express and the Torpedo Run.

Niccolini’s Song By Chuck Wilcoxen Illustrations by Mark Buehner
I love Mark Buehner’s illustrations and this book is no exception (I love his anthropomorphic trains) This story about a night watchmen singing the trains to sleep is a great bedtime book.

The Pony Engine By Doris Garn and Frances M. Ford Illustrated by Gregorio Prestopino
I was familiar with the Watty Piper book entitled “The Little Engine that Could.” So I was confused when I picked up “The Pony Engine” at a yard sale one day. The story in both books is pretty much identical. So what gives? Well, in fact, the story of the little engine that couldn’t get up the steep hill was not actually written by Watty Piper. In fact, Watty Piper was not even a real person. The true origin of the story is murky at best. See the Wiki entry and also here. But regardless of who came up with the story first, I prefer the Doris Garn and Frances Ford version the best. Sadly this version is out of print. But there are lots of used copies available.