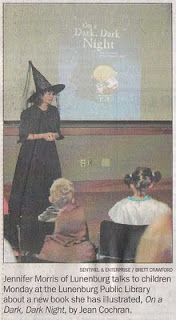 Holy newspapers Bat Man! I have been mentioned in three newspapers this past week. I’m starting to feel like Paris Hilton. I think I need a chihuahua.

The Fitchburg Sentinel and Enterprise did a story about my visit to the Lunenburg Library yesterday afternoon. Front page even! It was a lot of fun, plus I was able to wear my normal clothes 🙂 It was close to 90 degrees yesterday so I wore shorts and flip flops to the library. The picture doesn’t show that I was still wearing my flip flops during my presentation (oops, I forgot my black shoes). But I bet even witches go to the beach in August.

Here’s the article (copied from sentinelandenterprise.com)

LUNENBURG — Local author and illustrator Jennifer Morris provided about 20 children with a sneak peek of her new book Monday during a Halloween-themed event at the Lunenburg Public Library.

Morris drew all of the illustrations for On a Dark, Dark Night, which was written by Jean Cochran and is due out in September.

The book is about a boy who fears that a witch is lurking around his house. Fittingly, Morris came to the event dressed like a witch. Several of the kids who attended the Halloween in August event also dressed up in costumes.

“You guys are going to be the first to see the new book,” she told the kids. “You can’t get copies in stores yet.”

Morris, who has lived in Lunenburg for the past nine years, read the story to the kids and explained a little about her job as an author and illustrator.

Morris said she is constantly sketching things she sees in everyday life as practice. She also studies the anatomy of humans and animals to aid in her illustrations.

“When you draw people, you need to know where those bones are,” Morris said. “It will make your drawings much more realistic.”

Morris demonstrated to the kids how she draws a cat. She does all of her illustrations in pencil, and then scans them onto a computer to add in the color.

“All of my illustrations for books have been digital,” Morris said. “It’s great because you have an undo button.”

Morris, who has worked as a professional author and illustrator for
Advertisement
Quantcast
10 years, has done two other children’s books.

May I Please Have a Cookie? is available through the Scholastic Readers Club, and Please Write Back! is due out in April.

“It’s been pretty cool,” she said. “Getting paid to do something you love is always a good thing.”

She attended the University of Pittsburgh and received a bachelor of science degree in computer science with minors in art and mathematics.

Morris has had her illustrations featured in magazines and on greeting cards and party supplies.

She was honored earlier this month by High Five Magazine for illustrations she contributed to the September 2008 edition.

The drawings depicted a child receiving her very first backpack. The illustrations were named Best of the Issue by members of the magazine’s editorial, art, and production staff.

Morris lives in town with her husband Michael, and their children, Robin, 11, and Leo, 8.

For more information about her work, visit www.jemorris.com.