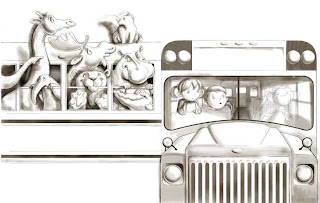 To do this underpainting layer, I don’t use black, I use a yucky, mix-all-your-play-dough-together kind of color and white. I paint this in Photoshop following the original pencil drawing that I scanned in. I use a couple of different paint brushes but mostly one called “Dark Pastel” which I think came with Photoshop.

There are some geometric areas of the image that I used Illustrator for. For example, for the grill of the bus, I created all those skinny dark areas in Illustrator, copied as paths into photoshop then used them as my selection. Then all I have to do is color them in. It’s way easier than trying to draw them freehand.

I’m hoping to get the underpainting done tomorrow and start adding some color.