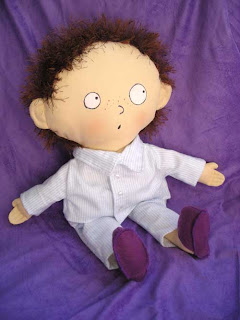 I thought it would be fun to have a little mascot to accompany us to our book events this fall. So I had the idea that I would ‘quickly’ make a cloth doll that looked like the main character in the book. I tend to say things like that. I’ll say stuff like, “I’ll quickly sew some curtains for the kitchen” or “I’ll just whip up some pillows for the sofa.” My husband calls it naive optimism. And as usual things didn’t go as quickly as I had hoped. I was up until 2am last night working on this little guy. And it looks like a fabric bomb went off in here. But in the end, I think he turned out okay. The only problem I have now is, what to name him. The book never refers to the character’s name. Anyone have any ideas?

On a tehcnical note, I had planned on using fake fur for his hair. Didn’t they used to sell strips of long fake fur in the craft stores? Am I imagining things? I couldn’t find it anywhere. So I ended up crocheting his hair out of “Fun Fur” yarn. I think it worked out even better in the end.