I haven’t done a tutorial in a long time so I thought I’d share some of the newer Photoshop tricks and techniques that I’ve learned lately.  Here’s a piece that I did for the Illustration for Kids February promotional mailer. 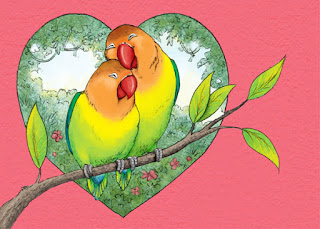 For this image, I knew I wanted to make two love birds so I downloaded a bunch of reference photos of love birds and created a rough pencil drawing. It was pretty messy, so I redrew it on tracing paper. 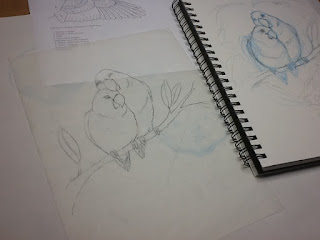 I scanned the pencil drawing of the birds into Photoshop and cut and pasted it into a new photoshop document, making sure this new file was the size of the final artwork and in RGB color mode.  I made sure I included all the necessary bleeds, so there weren’t any surprises later. 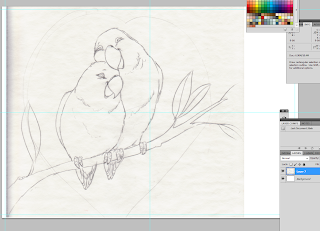 Then I created the heart shape in Adobe Illustrator and cut and pasted (paste as pixels) into the Photoshop file. Then I erased the parts of the heart that should be hidden by the birds. I also sketched in the rest of the leaves on the end of the branch. 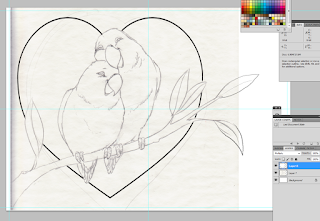 For this illustration, I wanted everything in the image outlined in a grainy pencil line.  To do that I could have created a new layer in Photoshop and traced the image using the brush tool, but I haven’t found a pencil brush in Photoshop that I’m completely happy with. So I decided to print the image out on drawing paper and trace it with a soft graphite pencil.  But before I did that, I made some modifications to the image.

I selected the layer with the birds and clicked on Image->Adjustment->Levels.  I then adjusted the level sliders in order to make the whites whiter and the pencil lines darker. 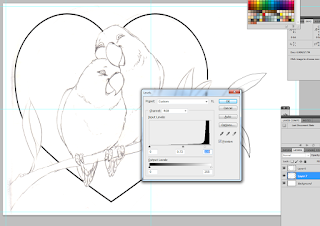 Next, I wanted to make the whole image a pale blue color, sort of like a non-photo blue pencil.  To do this I made sure I was on the topmost layer of the file and I created a new “Hue/Saturation” adjustment layer.  In the Adjustments window I checked the “Colorize” check box and moved the hue slider to a cyan blue color and increased the Saturation and Lightness until I was happy with the results. 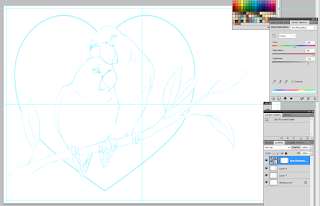 Next I stuck a sheet of Strathmore drawing paper in my inkjet printer and printed the image.  I then traced over it with at 4B pencil. 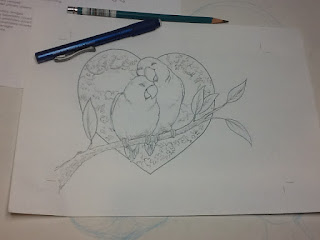 Then I scanned it back into Photoshop, adjusting the Levels as needed to make the whites white and the darks dark.  It wasn’t bad, but I had a few places where I didn’t follow the lines exactly so I had some light blue lines showing through. 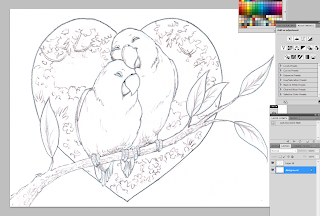 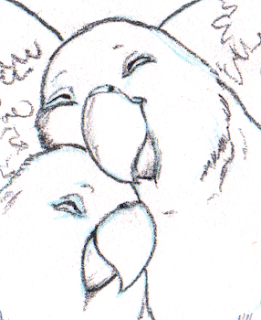 In order to get rid of these blue lines I went the the “Channels” window.  By default Photoshop makes all three color channels visible (red, green and blue)  By clicking on the little eyeballs next to each channel I could turn each one on and off.  I could see that the blue lines show up much more on the red channel but not so much on the green and blue channels.  I took advantage of that to get rid of those pesky blue lines. 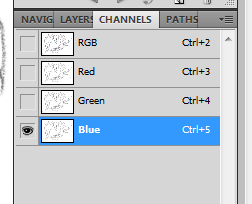 To do so, I clicked on the blue channel while holding down the CTRL key.  This selected everything in the blue channel, actually this selected all the white areas in the blue channel. By clicking on Select->Inverse I was able to select all the dark parts.  Then I created a new layer in my file, made sure my foreground color was black and press ALT-Backspace to fill the selection. Tada! now I have a new layer that is just my pencils lines an nothing else.
Phew! I think this is a good place to stop for now. Next time I’ll go over how I colored the artwork.