No illustration Friday this week. We just got back from vacation. We spent the last 4 days in Iceland. The first thing everyone says is “Why Iceland?” to which I reply, “Why not?”

The food we had was all very good and most of it pretty tame. Although some of the traditional dishes of Iceland aren’t exactly going to give McDonald’s a run for their money. Here’s a sketch I did of the restaurant sign at the Reykjavik bus terminal. 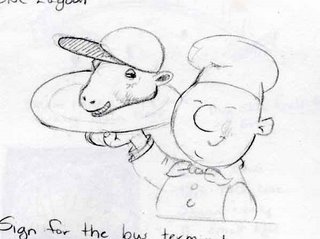 I believe that’s a boiled sheep’s head that’s creepily smiling at the Chef Boyardee man. I don’t know if they are traditionally served wearing a baseball hat or not. Unfortunately, we were not at the bus terminal long enough to stop in for a bite.

But we did try another Icelandic delicacy. Here it is on the menu outside the restaurant…

I believe it’s called hakard, which is the Icelandic word for rotten shark meat. They leave it to rot for 6 months, one account I read said the process removed neurotoxins from the meat. With all the fresh fish and bird meat available in Iceland, why the settlers felt they had to eat rotted shark is beyond me. It smelled like turpentine or ammonia (or both). I had 2 small bites of the stuff. They must have pick out a nice piece for us because it really didn’t taste that bad (note, I had two bites). Not that I’m going to order it again, mind you. I didn’t meet anyone that said they actually liked the stuff. It’s traditionally washed down with Icelandic Schnapps, affectionately called “Black Death.”

The shark was served as a appetizer. I had an entree of cod chins. Yes, it’s just what it sounds like – the chins of cod fish. Cod fish don’t have chins, you say? From what I understood this is the muscle under the lower jaw of the fish. The meat was chewy but it was really quite good. I can honestly say, they were the best cod chins I’ve ever had.