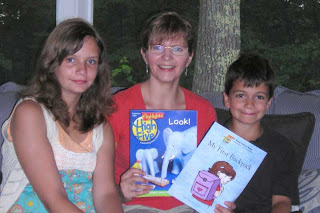 August 4, 2009 (Columbus, OH) – Jennifer Morris of Lunenburg, Mass. has
been honored by Highlights High Five for her illustrations for the
September 2008 issue’s bonus pull-out pages titled “My First Backpack.”
Morris’s illustration was named “Best of the Issue” by the Highlights High
Five editorial, art and production staff.
Morris says she was thrilled when Highlights High Five contacted her
about illustrating for the magazine because she has fond memories of
Highlights from her childhood years.
Highlights High Five Editor in Chief Christine French Clark says
illustrators like Morris “help us achieve our objective of bringing the
most imaginative and original works to our readers.”
In recognition of her achievement, Morris received an 8-inch pewter
plate engraved with her name, the title of the winning illustration and the
issue in which it appeared. The pewter plates are handcrafted in Honesdale,
Pennsylvania, the home of Highlights since its beginning in 1946.
In January 2007, Highlights began publishing Highlights High Five, an
adaptation of the classic magazine for pre-readers and beginning readers
ages 2 to 6.
Each month, the staff of Highlights High Five votes for the author
and illustrator whose work it considers to be the best in that issue.
Editor in Chief Emeritus of Highlights Kent L. Brown Jr. established the
tradition in 1982 as a way to show appreciation to freelance contributors
for excellent work.
Morris is an award award-winning illustrator and children’s book
author. Her illustrations appear in children’s picture books, children’s
publications and on greeting cards and party supplies. Morris has won
national awards for several of her greeting card designs.
Two books Morris has worked on will be released in the next year.
“On a Dark, Dark Night,” illustrated by Morris and written by Jean Cochran
comes out in September. “Please Write Back!” which Morris wrote and
illustrated will be released in April 2010.
Morris shares her excitement for this award
with her husband Michael and children Robin, 11, and Leo, 8.