I signed up to participate in the poster contest at the New England SCBWI conference this year. This year’s theme is to redo the cover of a book that you consider a milestone in children’s literature. I decided to do “The Cricket in Times Square.” I chose that book for two reasons, one, because I really enjoyed it as a kid and two, I was helping out in the library at the elementary school last year and I recommended Cricket in Times Square to a third grader. When she saw the cover she curled her lip and said, “gee, it’s sort of old looking.”

So in the next few days I’ll try and post my process for redesigning the cover for what it’s worth. Maybe it will help someone else.

First, I was very lucky to happen to by in NYC earlier this week so I was able to take some reference photos of Times Square and actually sit down at a table and draw for a while and try to soak up the atmosphere. Note, right behind a police horse isn’t the greatest location to draw. 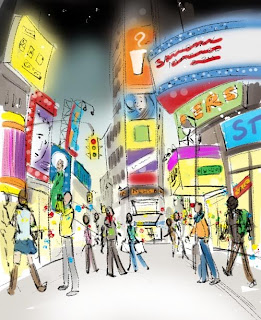 Next I went to the book store (I went to Books of Wonder – Great kid’s bookstore) and bought a copy of the book.

Then I started doing some online research. The first thing I did was google “Cricket in Times Square” I had remembered an animated version from when I was a kid and I also wanted to see if there were any other illustrations out there. I didn’t want to duplicate something that’s already been done. But check out what I found. The original cover art is actually up for auction! Sadly I don’t have an extra $10,000 laying around. But it’s pretty neat to see the original separations.