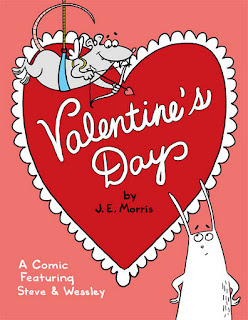 My new comic is dedicated to people who don’t have enough hours in their day. Most of this comic was done during all those little down times during my day. I worked on it at the car dealer while waiting for an oil change, at my son’s Taekwondo practice, at the doctor’s waiting room and at the Chinese restaurant while I was waiting for my hubbie. Most of it was done with a Pentel Brush Pen. They are very cool, they allow you to use use brush and ink practially anywhere.

I did do the lettering and speech bubbles in Photoshop and I also cleaned up my messy messy ink drawings. (I didn’t realize how out of practice I was using a real brush – Eek!) I would have rather done this story using the same technique as the other ones in the series, but I didn’t think I would have them done in time for Valentine’s day, besides, what would I have done at Taekwondo practice?

The whole story will be posted over the next two weeks in the free comic section of my website.