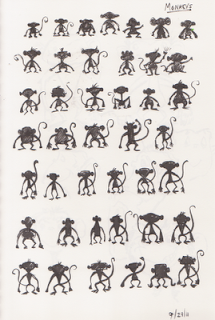 I have been in serious need of some inspiration lately so I bought some new art books. One of which was the Skillful Huntsman. This is a book of concept art that could either be inspirating or just depress the heck out of you. Are there really folks that talented out there?!?

One technique that I got out of the book was creating silhouettes to explore character design. And since I got a nifty new Pentel pocket brush pen, I thought I’d take a stab at a monkey character for an idea I’ve had banging around for a while.

It seemed like when I tried to deviate too much it immediately stopped reading as a monkey. It was an interesting exercise, and it really made me think about what makes a character recognizable as a monkey.

I’m loving the brush pen BTW. I like it way better than those felt tipped brush markers. This is actually a brush with bristles, very cool!