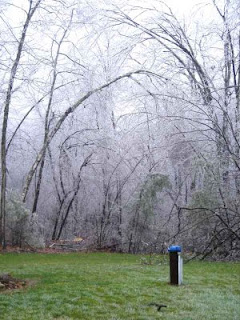 Wow, it’s been a while since I blogged. Things have been a bit busy the past month. We had a pretty bad ice storm here in New England back on December 11th. The above is a pic from my back yard. (The trees normally don’t bend over like that.)

It was really beautiful, especially when the sun came out later in the day, but it wreaked havoc with the trees and power lines. Driving through town that afternoon was like driving through a war zone with power lines and trees laying everywhere. I’ve never seen anything like it.

Needless to say we lost power. Boy did we lose power! It took 10 days for the power to come back. We stayed with relatives out of town most of that time and when we returned the temperature in our kitchen was a chilly 28 degrees F. The flowers on the kitchen window sill were frozen in the cup of water. Luckily we didn’t have too much damage, just 2 leaky pipes (some friends had all their pipes burst) Even our goldfish in the basement, made it through the ordeal. Although they were swimming VERY slowly when we returned. The whole mess certainly made for an unusual Christmas this year. 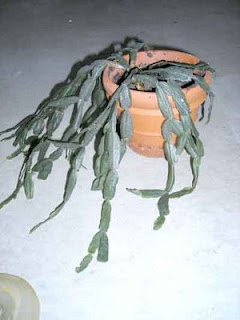 One casualty of the storm that I’m really bummed about is my Christmas cactus. It wasn’t very large or anything but it was a cutting from my great-grandmother’s cactus. I believe the cactus originally belonged to her grandmother. Which would make me the 6th generation to have this particular house plant. Kind of a weird heirloom isn’t it? Hopefully someone in the family still has a piece so I can get a new cutting.